There are seven offenses that can lead to the awarding of the yellow card:

1) Unsporting behavior. This refers to a foul or conduct that violates soccer’s accepted rules of sportsmanship. Examples are actions that intend to deceive the referee or extravagant celebration like removing the jersey.

2) Dissent by word or action. To keep the authority of the referee, dissents (verbal or non-verbal) can be considered an offense. This includes mass confrontation around an official, any aggressive action towards the referee and excessively loud comments directed at an official.

3) Persistent infringement of the rules. Football fouls and infrigements are inevitable during a match. But if a player repeatedly commits the same foul or infringement, the referee will consider it a violation worthy of a penalty card.

5) Delaying the restart of play, and deliberate time-wasting. Any acts with a sole purpose of wasting time are considered cautionable offense. Examples include taking a free kick from the wrong position to force the referee to order a retake and intentionally delaying the exit during substitution.

7) Leaving the field without the referees permission. The field of play is considered sacred ground during the duration of the game. The soccer referee serves as the supervisor and only he can give permission to either leave, enter or re-enter it.

Upon submission the data from the previous form submission should be there after refresh.  Radio buttons, date, and comment fields will not repopulate.

The graphic below shows the fields that will and will NOT be populated when you click on the button after the first submission. 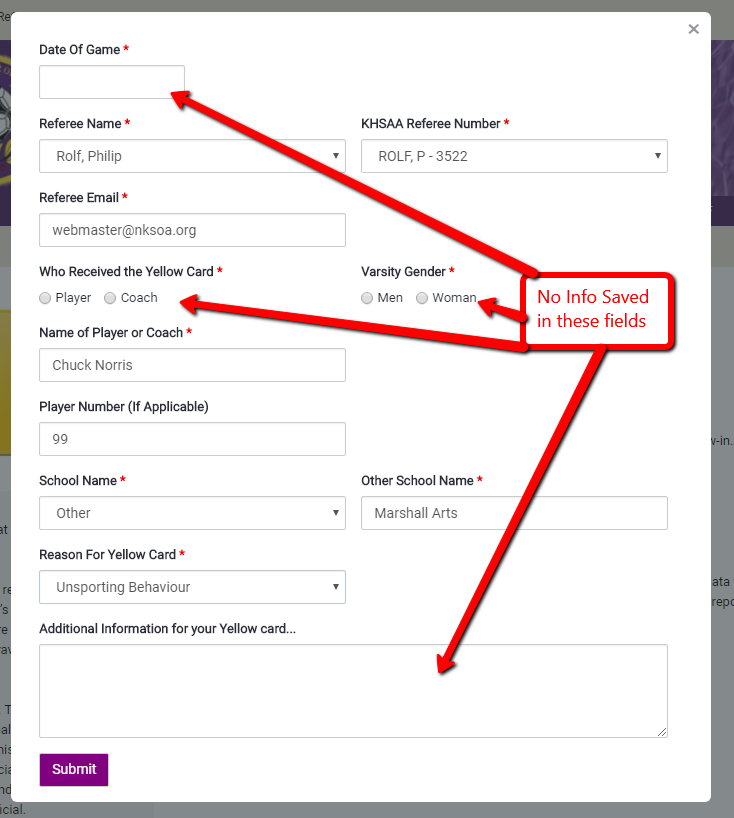